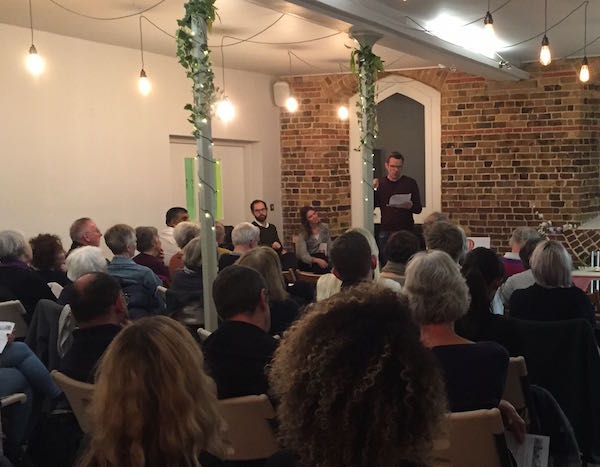 The Winter 2016 De Beauvoir Balloon debate brought together three very different topics, which were mulled over amid mince pies and a festive atmosphere.

Lara Prendergast of the Spectator opened the debate, with a look at technology overload. This is a subject close to the hearts of many these days. “Technology is taking over the mind,” she argued, claiming that over-reliance on gadgets and websites is causing early memory loss and flabby thinking. Instead of committing facts to memory, we rush to our gadgets for the simplest information. Our smart-phones are also turning us into screen-addicts with diminishing social skills. Few in the audience could disagree, though one member pointed out that personal choice remains an important factor, and that the individual is still in control.

Dr David Maguire shared his deep concerns about the changing face of masculinity, which he said, is causing confusion and self-esteem issues for men the world over—especially those struggling to rebuild their lives after coming out of prison. Male stereotypes create prisons of their own, with ideals that are impossible to live up to. Fresh ideals of manhood are urgently indeed, now more than ever in this new age of demagogues.

The evening finished with an uplifting argument from Josh Spero, columnist at the Financial Times, and an ardent lover of Wagner. It IS possible for a Jew to love Wagner, claimed Josh. Wagner’s anti-Semitism should not stop us enjoying his fabulous operas. Artistic talent and a deeply flawed personality often go hand in hand, and one ought to be able to appreciate the former while not sanctioning the latter.

It was the Balloon’s closest-ever vote, but in the end most in the audience plumped for David Maguire’s impassioned plea to look at fresh perspectives of masculinity.

The Balloon went off to enjoy Christmas, and looks forward to taking off again in March 2017!