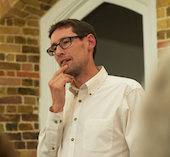 Nearly 65 people spurned the final of “Bake Off” to take part in a fascinating exchange of views in De Beauvoir’s autumn balloon debate on October 7th.

Darren Hall spoke first, giving his fresh take on democracy. The former green candidate for Bristol West spoke passionately about the toxicity of the current parliamentary ‘whipping’ system, and the importance of proper engagement in issues that should transcend party politics.

Dr Clare Hornsby gave a captivating account of beauty, truth and goodness, a triad that, she argued, could save us from our own failings. Drawing on the ideas of Plato and the classical tradition she showed us that the consciousness unique to humans gives us a shared idea of virtue. If observed and applied to the ways we govern our private and public lives we will achieve the elusive ‘Good Life’. A question from the floor as to whether Dorian Grey was beautiful helped elucidate her inspiring argument.

Britain would be better off outside the European Union, argued Dominic Cummings, in the shortest yet most contested speech of the evening. Citing numerous examples of the UK losing decision-making power, and money, to Brussels, Dominic claimed that voting to leave would open opportunities to trade with emerging markets, redirect the membership money towards national needs and allow better control of borders. This timely discussion allowed the audience to reflect on their position in the week that both ‘leave’ and ‘stay’ campaigns launched.

Dominic won 13 votes, Clare came a close second with 16. The winning argument of the evening was Darren’s, whose democratic ideals won 24 votes from the audience.